The so-called War of the Camisards is an armed uprising which mobilized the Protestant population in the Cévennes region and in the plains of the Lower Languedoc area against the royal authority between the years 1702 and 1705.
Traditionally, the beginning of the war --- or what will later be called the guerilla --- is dated July 24, 1702, when the Abbot of Chaïla was assinated at the Pont de Montvert. The third centennial of this event will be commemorated in 2002. But the situation had been explosive for a long time, and it is not possible to analyze these events without taking into account the so-called "prophetic movement" which had appeared in the region of the Vivarais (nowadays the Department of Ardèche), around 1688. This charismatic movement expanded throughout the Cévennes, starting in 1700. Neither can we separate this Camisards uprising from previous violent actions such as that of the preacher Vivent. The period we propose to study will therefore include the entire period preceding the outbreak of the war, starting with the Revocation of the Edict of Nantes in 1685.

It must also be remembered that even if the War of the Camisards ended as such with the surrender of the last (or almost last) rebels, in January, 1705, several upheavals were still to take place in April and May 1705 with the "Plot of the League of the Children of God", in 1709, with the mobilization of armed troops in the Vivarais area at the call of Abraham Mazel, and after his defeat, a new attempt in the Cévennes and the Lower Languedoc in 1710.
The date we shall retain as the end of the events to be described is 1715, for several reasons: Antoine Court arrived in the Cévennes and contributed to the restructuring of the Protestant population. The first "Synode du Désert" was held at Montèzes. The death of king Louis XIV signals an entirely new phase in the history of French Protestantism. But we shall not hesitate, at times, to look beyond the ominous year 1715 for relevant facts such as the death of several actors of this drama, the liberation of some prisoners, etc.

The point is not, however, to discuss all the events that took place between 1685 and 1715. We only intend to mention the facts relating directly or indirectly to the Camisards war itself. A chronological list of events is being prepared with the purpose of presenting the essential sequence of events in this local war.

From the geographical point of view, we can say that the events took place primarily in the Cévennes mountains and in the plains of the Lower Languedoc, but we shall keep in mind that the Camisards tried on several occasions to trigger uprisings among the Protestant populations in neighboring areas: Vivarais, Dauphiné and Rouergue. The various prisons in which the Camisards prisoners were kept are located sometimes very far from the Cévennes, as for example the city of Carcassonne, Marseille and the forced labor on the infamous "galères". Finally, we shall take a look at the countries were the rebels took refuge, or retired, or were forced to retire, often in the hope that a more favorable opportunity for action would eventually present itself. Our geographical background will include all of these factors and will be sufficiently wide in scope to allow an in depth analysis of the Camisards War in all its aspects. 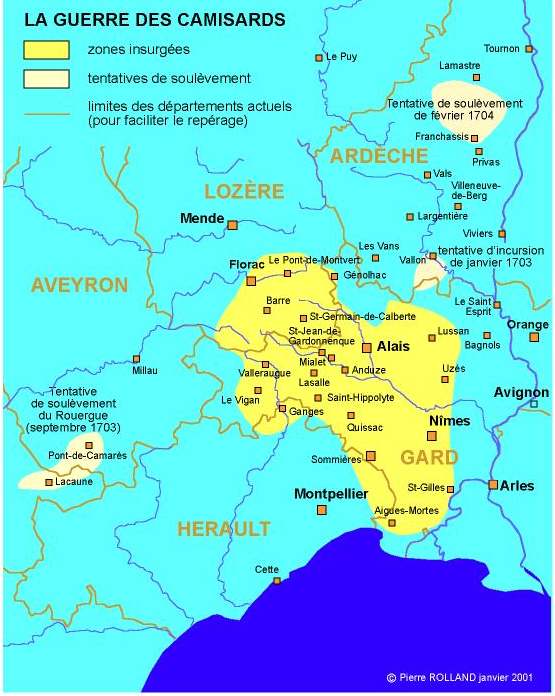